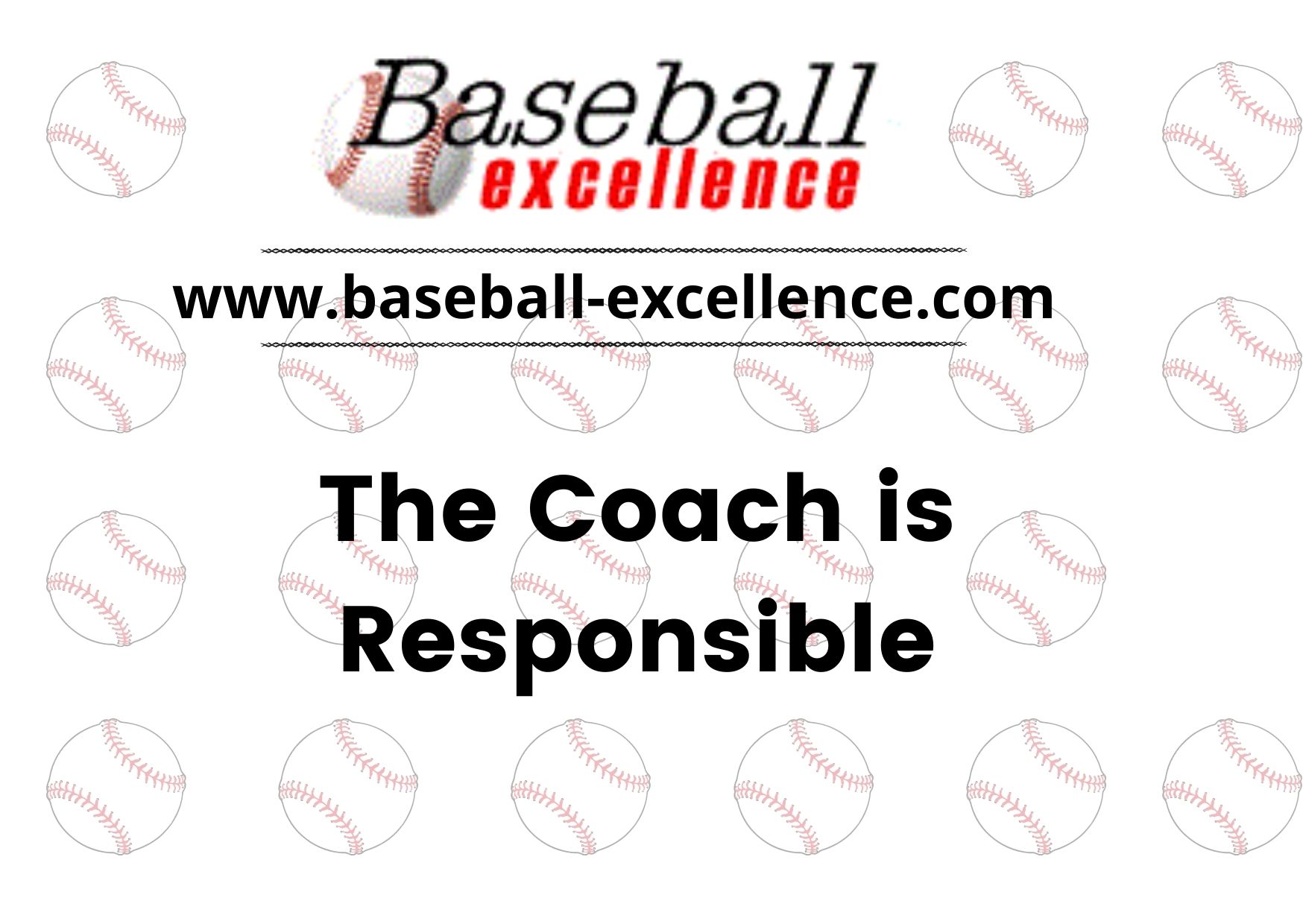 How You Act Is Learned Behavior.

Those of you who saw the LL World series a few years ago may have grumbled, “They’re doing what the major leaguers do on TV.”

“They’re inner city kids.” Or, “They’re just kids, let’em have some fun.” This stuff was on every network and talk shows were spawned over the Harlem kids’ behavior.

But I didn’t hear anyone say; “the coach is responsible.”

What is the name of that recently published marketing best seller? “It’s About The Brand, Stupid.” Well, “it’s about the coach…”

He is the one who sets the tone. He is the role model. He is the leader. He is the teacher. He must show the way.

What if the parents don’t instill appropriate behavior in their kids? Then it is up to the coach.

I thoroughly enjoyed a statement made by Tony
Gwynn. “There is only one way to play the game. And it’s the right Way.”

The coach is responsible for teaching the “RIGHT WAY.”

When on the baseball field practice or games, the coach is the one who is accountable for his players’ actions. He must be a role model. He should be held responsible.

There is nothing more unfortunate when kids show unsuitable behavior on a baseball field and the coach just shrugs his shoulders as if to say, “Whatareyougonnado?” “They’re just kids.”

If a coach is going to teach respect for the game then there are things he must do.

Kids, being kids may act in unpredictable ways and the coach should keep them on track and provide an environment of learning and stability on the baseball field.

Discipline is not a dirty word. Discipline as it relates to order, control and restraint.

One of my pet peeves is not tucking shirttails in at practice. I coached a group of high school kids this past summer and I must have said “tuck your shirts in” at 10 practices.

Their HS coach did not require his players to tuck’ em in and I had to sound like a broken record more times than I cared to. It’s a shame when ‘tuck in your shirt’ has to become a NGI situation.

But I know this kind of directive will help them and maybe carry over into games and maybe even life.

It is so easy to give in; to leave them as they are, to not say anything.

And that is what some school teachers and parents do. Consequently kids are sometimes left to their own devises and their behavior can become negative.

You can take a few behavioral problems on a team and you will have a mess. These kids always will bring a team down to their level.

Over the years I have listed the many “Little things” that coaches must do to build a winning team. The coach is responsible for teaching them.

Back to the LL World Series; just as the Harlem kids displayed poor behavior, the Kentucky team was the opposite. They showed poise, pride and respect.

Teach the responsibility of coming to practices and games on time. Teach your players respect. Besides teaching respect for your teammates, coaches should also teach respect for the game and for oneself. They should exhibit good sportsmanship, don’t allow offensive language, cheating or fighting.

Make sure your players understand the difference between aggressive and hostile play. Aggressive play is playing physically within the rules with the intent to win and do ones best.

Modeling is a credible concept. There have been studies in the behavioral sciences regarding this method of influencing people.

People can be influenced simply by observing other people.

Why? One study observed three points.

“First, people can be influenced very easily. Just by watching what other people do, we can acquire new ideas and behaviors.

Second, modeling seems to be a dominant way that people acquire new behaviors. Whenever we are in a new situation, we almost always look around to see what others are doing.

Third, the whole process requires very little thinking on the part of the observer.

Indeed, modeling is faster if you simply copy the model rather than try to figure out everything that is going on.” Bandura, A. (1977). Social learning theory. Englewood Cliffs, NJ: Prentice-Hall.

Therein lies the problem. A youngster sees (or thinks he sees) a player do something on TV and he immediately takes it to the practice field.

He sees Gary Sheffield wrap his bat and he copies that style. How many young hitters have you seen try to copy Ken Griffey Jr,’s rhythm movements at the plate? Or worse, how many kids have copied Griffey wearing his baseball cap backwards?

If a coach allows his players to freely emulate what they see others do then they are shirking their responsibility as a coach.

Coaches live in a “Never Give In” world and to allow his players to succumb to peer pressure is to give in.

A coach has a philosophy of teaching and often young players’ are at odds with his approach because they have emulated someone else. (Peer pressure is almost always negative.)

Why don’t kids copy their coach? (I suspect because he is trying to teach them something that is difficult.)

It is much easier to imitate success without having to go through the painful process of learning a baseball skill correctly.

The coach cannot give in-ever. And the great coaches never do.

Want a standard with which to measure a good coach? Watch him speak to his team. All eyes will be on the good coach; teacher, communicator, mentor.

If you observe the average coach speak to his players you will see eyes wandering; and talking among the players.

Classroom or baseball field, the best are easily recognized.

So you wanted to be a coach. Beside that wonderful farmer’s tan you have, you carry quite a responsibility.

Holding Base Runners On

Coaching Cues – The Power of Words