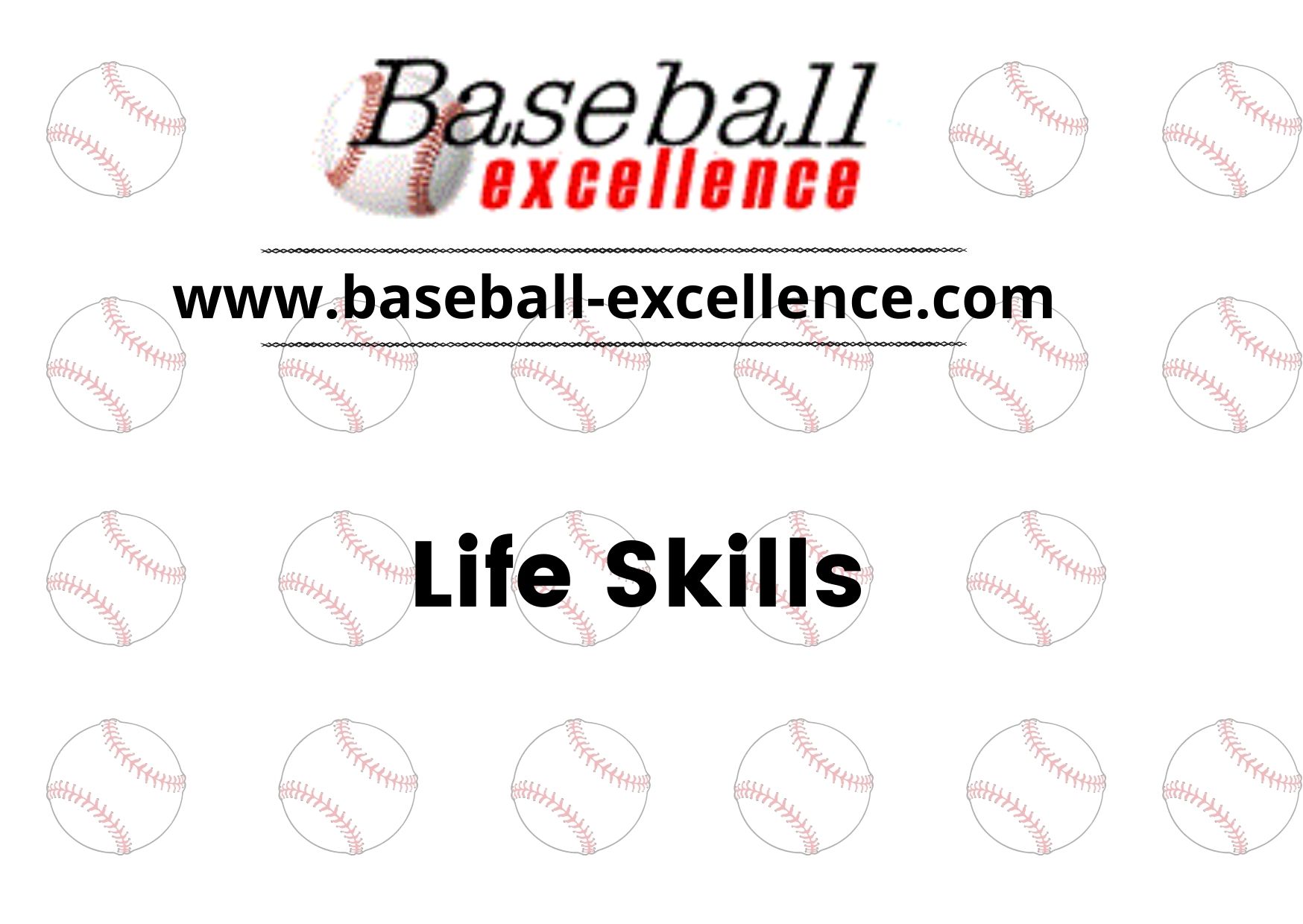 These are all imposing words and phrases but what parent wouldn’t want his child to grow up and live by them?

Most sports activities inherently teach such attributes as teamwork and determination. But baseball is unique in that it can often mirror life itself. The great length of baseball seasons and the mere fact that failure is an innate part of the game offer coaches and parents opportunities to teach many more of life’s admirable virtues and skills.

Most psychologists and pediatricians tell us that parents should begin teaching virtues to their children at birth. For this reason we feel that it’s primarily the parents’ responsibility and not that of the youth coach.

However youth coaches should always seek opportunities to teach, not just baseball skills, but “life skills” as well.

We have found that some coaches spend too much time on the “life skills” and not near enough time on the baseball skills. Others make the mistake of putting too much emphasis on winning without teaching much of anything.

We believe that the youth leagues should operate like the professional Minor Leagues where winning is important but secondary to player and character development.

In our opinion, youth coaches should spend 90% of their time teaching hundreds of “baseball skills” before, during, and after all practices and games throughout the season.
Many of the life skills are taught by the game itself, thus the popular saying “Baseball is Life”.

Most of these skills are best taught by a coach’s example. In the words of Fran Tarkenton; “Leadership must be demonstrated, not announced.”

At Baseball- Excellence we don’t care for the “trash talking”, “in your face” attitudes that have filtered down from professional sports. We believe that today’s youth players need to learn how to win and lose with class and dignity.

These virtues will serve them well both during and when their playing days are over.

A youth coach should constantly remind himself of the three reasons parents sign kids up to begin with.

A coach should be ever mindful of the opportunities to teach young players Life Skills.

Practices and games afford multiple occasions for coaches to ‘show the way’ as it were.

Following are some examples of player behavior and the coaching opportunities that are quite common during the course of a season.

“End on a good one.” Have you ever said that or heard it? Of course we’re talking about batting practice and Johnny just took a poor hack at his last pitch. So the coach says, “End on a good one” and gives him another pitch.

We believe that a coach should give each batter the same number of swings. And any pitch that is a strike that is not offered at counts as a swing as well. To be effective hitters must learn to become aggressive. They must develop an inner strength as well. This simple routine, if adhered to, will make better hitters and teach some lessons as well. You don’t always get a second chance in life. Teach kids to take advantage of the opportunities as they get them.

“Coach, that mound is terrible.” How should a coach interpret that statement? I look at it as a pitcher giving me an excuse for a poor performance. “The other pitcher is using the same mound, son. No excuses.”

Do not allow excuses to creep into your players’ language. Remember NGI? Coaches must Never Give In to the path of least resistance.

You will find plenty of these types of phrases (excuses) if you look for them. They are born of human nature and perhaps encouraged because our schools no longer help parents teach virtues and life skills. (Our opinion.) So the coach should be alert for them.

Another area where coaches can help players is to instill in them the desire to compete.

You want players that will compete when the game is on the line and you want them to compete over the long haul of the season. Allow your players to fail. Don’t go off half-cocked when they make a mistake; strike out, make an error, or make a mental mistake.

If you will use these failures as teaching opportunities and don’t berate players, you will be well on your way to building a mentally tough team. A virtue that will enhance their adult years.

It is so easy to say to yourself; “I don’t feel like practice today. Mom, can I skip practice?”

Patience is one of the more useful Life Skills. Just being around the game of baseball will instruct one in the virtue of patience. Rain delays, batting slumps, extended innings, lopsided losses and periods of seeming inactivity (to the uninitiated) are all part of the game.In this fast-paced world and “I want it right now” culture, baseball can provide a welcome respite.

Coaches must learn patience when working with their players. Their development depends on this. Instant success does not exist in baseball. Its skills do not come naturally and must be taught and reinforced.

The EROC will not approach the game this way. He will look for immediate results and not focus on small improvements. The great coach will always notice and approve of development.

We are working with a player right now as his season is winding down. He has the terrible fault of keeping his front elbow high as he initiates his swing. This causes him to be late on almost all pitches and causes his bat head to drop below his hands. He has been hitting this way for years and no one has helped him.

I showed him the correct way and gave him a drill to help but so far he has not been able to carry this over into games.

Remember, a coach cannot make a player. He can only give him good information.

It is then up to how determined this player is and how great is his aptitude.

Personally, I question this player’s desire and determination. I am not sure if he will work hard enough in the off-season to become a good hitter.

Maybe I’m wrong. I hope so. He’s a great kid. But sometimes the parent may want it more than the player.

That little home away from home, the dugout is a wonderful milieu for teaching Life Skills.

What kind of dugout does your team have?

Would This Be A Better Way?

Here are a few suggestions for you to use:

There is a situation that we have seen that can inhibit the growth and maturity of a young player. It is the parent who is blind to his son’s shortcomings and skills shortfalls.

After observing so many doting youth parents the past 41 years I now understand what my dad meant when he said “youth sports doesn’t build character, it reveals character”. He never coached me but as a parent he always supported the coach (even if he was wrong).

If I complained about the coach or team he was quick to side with them. My complaints often fell on deaf ears; kind of “guilty until proven innocent”.

However when I displayed poor sportsmanship or copped an attitude, I paid the price when we got home (my dad never heard of time outs). Today I am thankful for this because it helps me see the other side.

My advice to youth parents is to love them but don’t spoil them.

Parents should be teachers and not meddlers. They should teach their kids not just how to play but how to think and fend for themselves as well; how to act independently of mom and dad.

Teach them interpersonal skills (how to communicate and interact with others). Teach them how to work through adversity.

How to correct mistakes/flaws (on their own) during games.

How to “think on their feet”.

How to learn from their mistakes and the mistakes of others.

We have all seen the parents that were blinded about their kid’s ability. The ones that always made excuses and blamed others for their kids short comings. Unfortunately these parents teach their kids to do the very same things. This is prevalent in every sport today. It is real. Learn from these folks.

You have to work very hard not to be like them. These folks are responsible for the term “daddy ball”.

These folks often feel like they are entitled to “take” because they give so much of themselves to their team and league.

Coaches that coach their own kids need to treat theirs just like they are someone else’s while on the ball field. Demand that they set the example in effort and behavior only (not end results).

They need to earn their playing time because of what they are and not who they are (they will appreciate this later). This will gain the respect of all teammates (and parents). This will make them “coachable” at the high school level and beyond.

Nobody loves their kids more than I love mine. But I never “over sold” them when talking to others. In fact I usually “under sold” them. People get tired of hearing how great you think your kid is! (Talk about theirs or the team.)

Doting parents often shorten their kid’s baseball future too. Because of their infatuation, they see few faults in their player. They only see that their 10 year old is batting .524. They don’t see that he is striding in the bucket and dropping his hands during his stride.
They get caught up in the moment (if it’s their oldest son, they don’t know any better).

As a result Johnny hits the “brick wall” on the 60/90 fields when he faces pitchers that change speeds and locations at will.

Many parents of 7-12 year olds have thought “he might” go on to play Major League baseball only to find out that he never even tries out for his high school team. In fact, half are out of baseball by age 14.

Youth baseball should be fun and a positive experience for EVERY PLAYER.

But there will be ups and downs. It is extremely positive to learn how to give your best effort to the teams’ cause; to lose and work through tough times individually. In fact it is sweeter to work hard, prepare for and beat a great team that beat you last time. It is sweeter when you work through a batting slump and start hitting well again. It is sweeter to advance to a world series than to enter ones that are “invitational”.

These are lessons that many parents are preventing their kids from experiencing. Many times they intervene too much and too soon.
Many up and quit, start their own team and hand their kid the starting shortstop position and number three spot in the batting order. He will probably have more fun (in the beginning) but what life skills will he learn from this (in the end)?

Life’s Lessons and Skills. Every year I come to love baseball more. I love to be in the middle of it coaching, and I love to stand back and watch our youth grow up and learn this grand game. We can have oh, so many positive influences on the young people we teach.

Not to be cheered by praise,
Not to be grieved by blame,
But to know thoroughly ones own virtues or powers
Are the characteristics of an excellent man…
Saskya Pandita