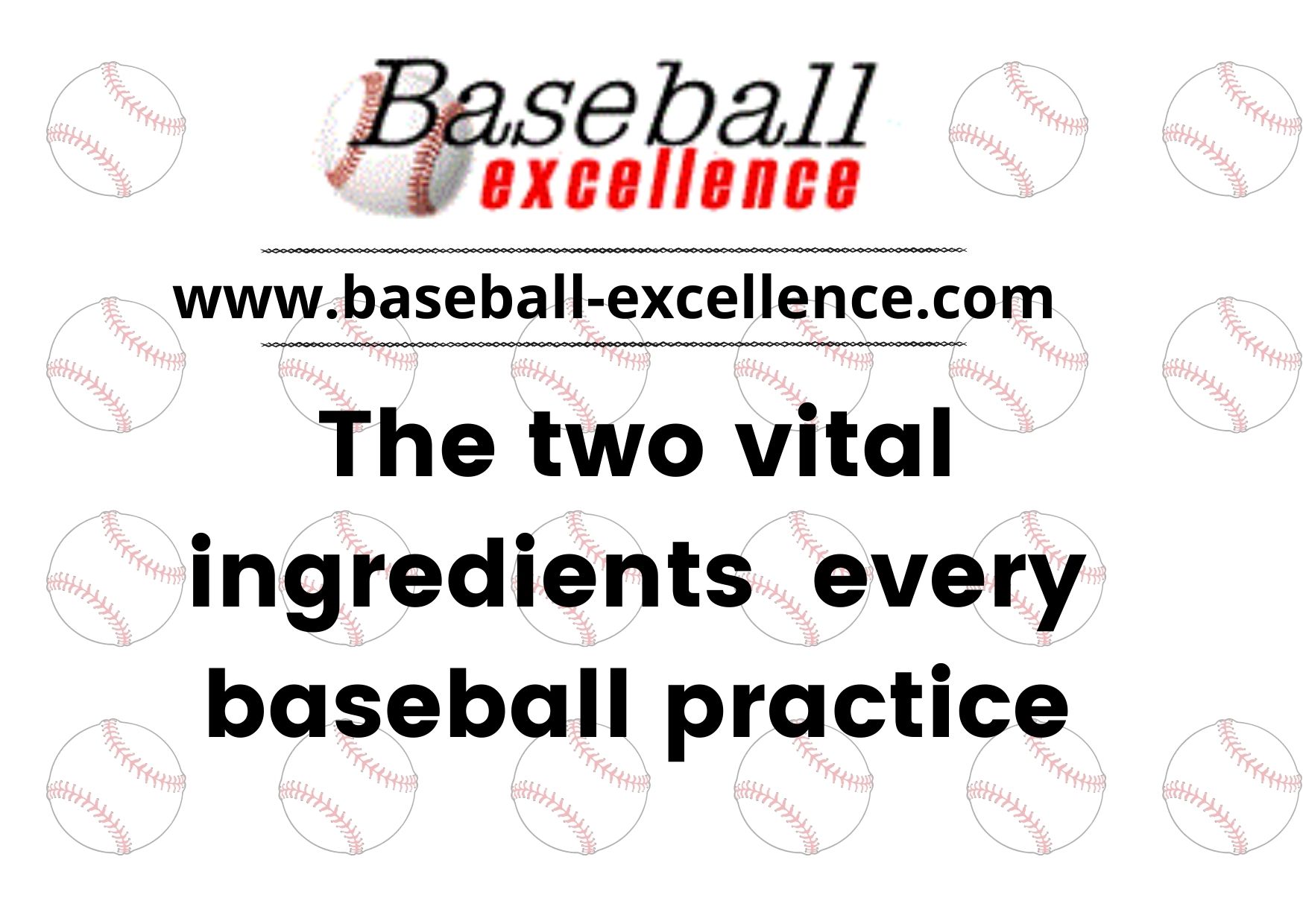 Why use the word ingredient? Let’s use the analogy of baking a cake. Since I’m on a low-carb diet I am always thinking about sweets.

What ingredients do you use to bake a cake? You might use water, flour, sugar, baking soda, eggs, flavoring, yeast, etc.

Just as you bake a cake from scratch so you build a baseball practice.

With baseball practice you can leave out an ingredient or two but there are two things every practice should have; a stretch, form run and throw routine and Batting Practice. No baseball practice can be complete without those elements.

With a sound stretching routine you will prepare your players for the rigors of practice, increase flexibility and guard against the risk of injury.

Stretching is the key to maintaining flexibility (how far and how easily you can move your joints- range of motion.) Flexibility is one of the keys to good posture. A regular stretching routine also can reduce pain and discomfort, particularly in your lower back.

And it simply makes you feel better.

Have we sold it to you yet? Don’t skip the stretching.
After a light jog to elevate their core temperature and get the blood flowing, perform stretches designed to get the entire body ready for play. Start at the top and work down. There is a routine in our Coaches Practice Planner.

Please do not skip this step. Novice coaches may think that it takes too much time and they may want to gloss over a good stretch routine. Stay on track and spend the time; at least five minutes, preferably eight to ten.

Execute each stretch slowly. Hold each position at least 10-15 seconds. This is a steady pull, not a bouncing motion.

It doesn’t matter the age group of your players. Stretch daily, from the fingers to the toes.

Form Running is one of the most important tools a coach has at his disposal. And yet we see very few teams using this exceptional training routine.

These exercises emphasize good running form and make the players utilize all the muscles that they need to run well.

They are specific to the primary running muscles, they emphasize proper carriage of the arms, and proper knee drive and leg marching action, and the coordinated proprioceptive and dynamic balance required for shifting weight from one leg to the other.

The ankle and hip joints go through considerable ROM with normal running stride, and each of these joints is exercised through a similar or greater range of motion during these drills.

Baseball players have to have explosive speed and the ability to stop on a dime and execute very difficult, often seemingly improbable defensive skills. Their bodies demand movements unique to this sport. Form Running helps them prepare.

“Let’s get right to throwing. We don’t need to do those silly-looking exercises. Besides we only have so much time anyway. We’ll stretch but we ain’t doing that other stuff. We’ll run ‘em after practice.”

Perhaps that’s the prevailing attitude on many baseball fields everywhere. More’s the pity. Five to eight minutes and you are helping your players build strength, become more coordinated, increase flexibility and agility, develop good running technique and walk and move like baseball players.

How intense should this routine be? We had a student come to us for a short time last summer. He is a great kid with a marvelous make-up and a lot of potential. The first day we did our stretch and Form Running he was bending over at the waist and sticking his fingers down his throat.

I know he was concentrating very hard and trying to do everything correctly as we taught him. (Wouldn’t you like to have nine players like that?) And he was not used to the Florida heat and coupled with his excitement and desire to do well he had to take a short break.

The first time you run these drills you will probably have some out-of-breath and maybe sore players. That will only serve to illustrate how important they are and how much work is needed to get them into ‘baseball shape.’

Here is our routine. The exercises are run in the outfield grass with the foul line as one boundary and second base as the other. Running is done at ¾ speed. Players all face the same way.

Attention to correct form is critical and coaches must constantly reinforce good technique. Run with an athletic posture with heads up. What’s an athletic posture? It can be described as a hitting posture; bent slightly at the waist, eyes straight ahead, on the balls of the feet and flexed at the knees.

Look at a point on the fence to remain oriented.

Divide the players into two flights; the second group goes after the first group reaches about half way. This gives the coach a better opportunity to observe and help each player.

Coaches must demand full conformity with these drills. This is ‘team time’ and there can be no clowning around. Players must be made to understand how important these exercises are.

Young players will look awkward when first attempting these drills. Coaches should take great pride in watching them improve as the season goes on.

Station a coach at the halfway point and with exercises 4 and 5 have the players turn around in mid-stride and finish by running backwards; they make the transition at the midway point. Running backwards help prevent hamstring pulls.

This is another everyday part of baseball practice. After the stretch and form running have the players pair off and throw together.

Begin at thirty feet and gradually move back to one hundred and twenty feet or so. Take about ten minutes to complete this part of practice. Throw with a limited arc and do not put a lot of air under the ball. No ‘casting.’ Use good throwing technique. One-hop the ball if necessary.

Every player on a baseball team must know how to throw a baseball. This is where good habits are reinforced. This vital ten minutes is used to concentrate on accuracy, building arm strength and endurance, good throwing form and getting an instant 4-seam grip on the baseball.

This first set of routines should be the beginning of every baseball practice. If you really want your team to show improvement over the course of a season then these are the tools to begin with. I would rather see a coach place as much emphasis on this part of practice as any other.

This is the second of the vital routines. This is not merely one coach throwing to one hitter; it should be a planned, orchestrated part of practice that includes the training of many skills.

In the March issue of the Baseball Excellence Newsletters we also covered Batting Practice. We’ll touch on these points here.

Sixty percent of baseball practice should be Batting Practice. And I think the key question is, “how do we utilize this time so that we:

We approach BP this way; go from Tee work, to soft toss, to opposite field hitting to BP rounds and (at least twice a week) to situational hitting with a base runner. Begin the first round by bunting at least twice.

When you add Situational Hitting to BP you may cut the number of rounds and/or swings in each round.

Situational Hitting initially will take a lot of time so you may want to spend an entire BP on these skills. (They are covered in the Practice Planner.)

Situational Hitting involves the important skills of bunting, bunting for a base hit, the squeeze bunt, hit-and-run, hitting behind a runner, hitting a ground ball into the middle of the infield and hitting a fly ball deep enough to score a runner from third base.

If you don’t have batting cages you can do it this way:

Okay, everybody is busy but what about the outfielders? Aren’t they just standing around, picking their noses? NO!

One of the most difficult skills in baseball is learning to track a fly ball. It takes practicing innumerable fly balls to become proficient at this skill.

Instead of just standing around in the outfield, players practice breaking on every pitch.
They learn to concentrate and see the ball off the bat. The hitter’s swing will tell the outfielders in what direction the ball is hit. They are to break in that direction.

The ‘break’ doesn’t have to be a long run, just a few steps to get an idea of where the ball will come down. Only the player closest to the fly ball makes the catch.

Bunting, hitting skills, base running, ground balls, throw and catch, tracking fly balls; not bad for an hour plus of Batting Practice.

It all goes into the category of time management.

Strategies to Avoid The ‘Big Inning’