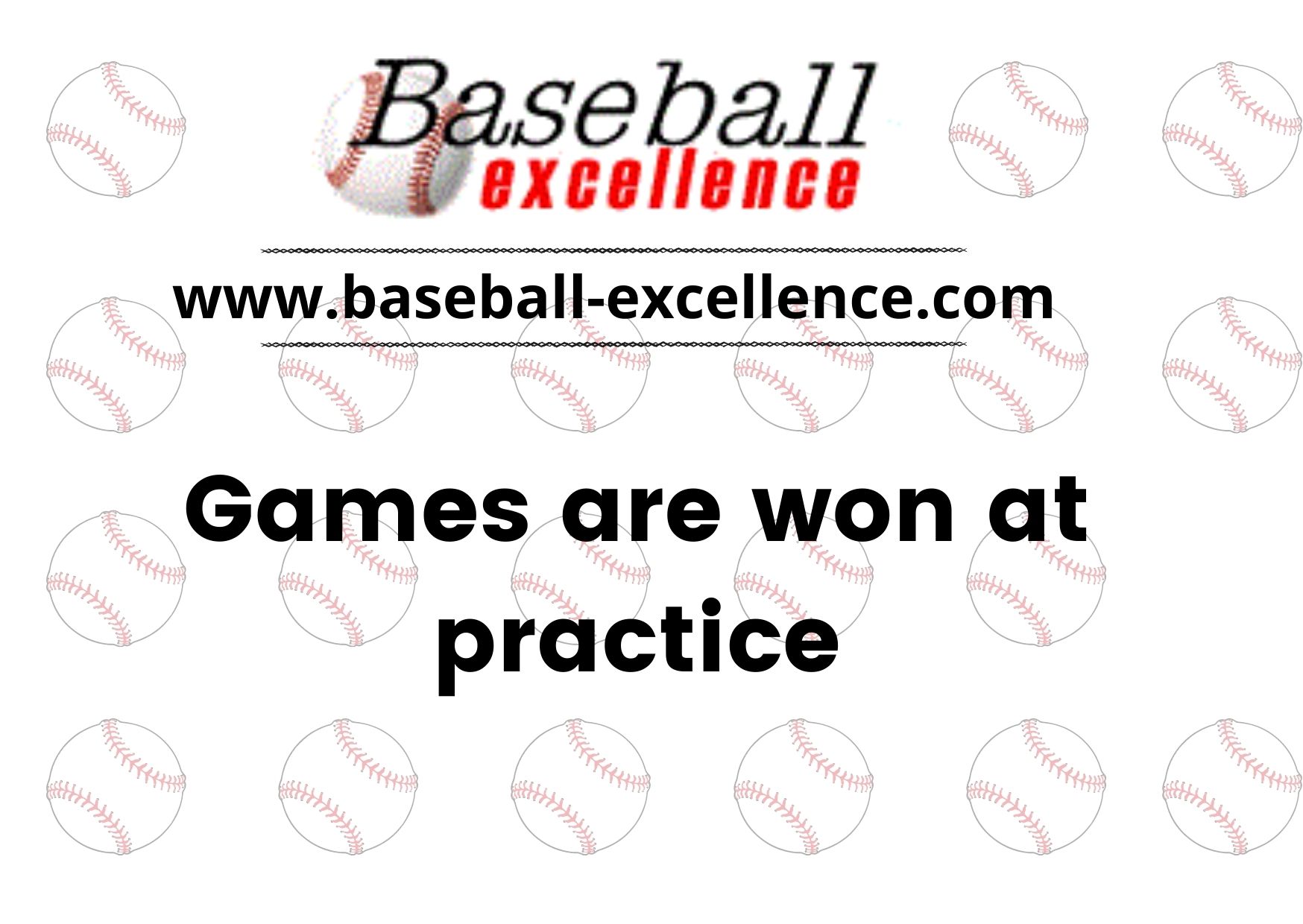 Keeping in the coaching spirit of this month’s Newsletter, we want to emphasize an important point. By preparing your players properly at practice, you will without doubt win your share of games. There is very little magic a baseball coach has at his disposal during a game; no special plays, no tricks and no assured influences. No special pre-game pep talks will influence the outcome of a game. No rah-rah stuff.

Your players have to play against the game. A ball will be hit to them or they will find they must hit a ball; there is no way to kill the clock or avoid the inevitable. The game must be played out. And that is the beauty and at the same time, the difficulty of baseball. All nine players must play both offense and defense. They must have skills in all areas of the game.

The way to win baseball games is to make the routine plays. And that is what a coach should practice; over and over. It is how he utilizes his time at practice and how he teaches that makes all the difference in the world.

What are the routine plays and how do I teach them at practice?

Sounds simple doesn’t it? It is. We coaches sometimes make it way too complicated. If you are a coach who tries to trick hitters or is afraid to have your pitcher throw the ball over the plate, your team is not able to make the routine plays. You haven’t coached them properly or you haven’t used practice time wisely.

I have written before about an opening day game when Stephen was 13. His junior league team started the season off with a perfect game; 21 up and 21 down. Was our pitcher overpowering? Hardly. He only struck out 3 batters. But that left 18 plays to be made and those kids made every one. That was the focus of our pre-season practices; making the routine defensive plays. I used every drill in the Practice Planner.

Okay, what is the one device a coach has to assure his players will develop and improve so they can be effective in game situations?

To our subscribers who have renewed over the years this may seem like old hat, but I feel the importance of this next statement should be emphasized and I don’t see coaches doing it during their practices. And the pre-season is a good time to go over it. Most of these skills can be practiced during Batting Practice! What? I thought BP was just for hitting. If all you’re doing during BP is hitting, you are wasting a lot of precious time.

Coach Grant, when he was scouting for the Diamondbacks once told me that there were very few high schools on the east coast of Florida that ran Batting Practice properly. That is how easy it is to get away from doing things right.

Why is there one “right way?” The model for using BP time wisely is the way professional teams do it. And it’s been done this way for untold years. There is no need to reinvent the game.

Youth and high school teams can do it the same way and reap the same benefits.

A side benefit is that your practices will develop a routine and become interesting at the same time. Kind of cool, huh?

Our Practice Planner goes over this but let’s go over it in a little more depth.

After a light jog, stretch, form run and throw. (Do not ever skip this step.) You do want you team to look, act and move like baseball players, don’t you? (15-20 minutes)
Spend the next 15 minutes on a defensive skill. During the pre-season you may devote more time here. There are just some things you must spend more time on.

The coach who is pitching or feeding the machine, can add realism by pitching from the stretch and occasionally step off or make a mock pick-off move. This keeps the base runner on his toes and helps teach him the proper times to go on a hit and run or bunt.

What are the defensive skills that you can work on during BP?

If you have a screen, you can set it up in front of second base and the infielders can practice their footwork and feeds on double plays. All this while a hitter is hitting on the field.

The timing of the fungo is critical to keep the infielders from having to dodge two balls hit at them.

Do it this way: the hitter hits his pitch and at the instant the ball is batted the fungo coach tosses his ball in the air and hits a ground ball to his infielder. As he tosses it, he can see where the batted ball went. The pitching coach allows 3-4 seconds before feeding the machine again. Don’t machine-gun the balls. Give the infielder time to field his ball and allow the hitter to get set.

All batted balls must be allowed to go into the outfield. The infielders must concentrate on fielding balls from the fungo coach only. This is an important rule. Murphy’s Law says that the second the infielder stoops to field a batted ball; the fungo coach will hit his ground ball, with less than desirable results.The infielders throw the ball back to the fungo coach on one hop. This is a learned skill. There should not be an extra coach to catch balls from the infielders. They are too important and are needed elsewhere. The infielders put enough air under the ball so that it takes a nice, easy bounce to the fungo coach. The reason for this is three-fold; tossing the balls frees up other coaches, prevents throwing overuse and keeps the infielders facing the home plate area for safety. If they threw over to first base they would be vulnerable to a batted ball.Outfielders break on every ball hit during BP. Just 2-3 steps to develop the skill of tracking the ball. They should learn to concentrate on the hitter. The way the hitter swings the bat helps the outfielder know where the ball is hit.Base running is practiced during the situational hitting phase and coaches are needed to teach the base runners. Put one in each coach’s box.

After batting practice spend 10-15 minutes on a skill that includes conditioning. We use Quarterbacks and base running. This is much more time- efficient that simply running sprints. Include a skill with your conditioning drills.

Save your skull sessions for rainy or wet days. You have to have these sessions and you don’t want to ruin your baseballs.

There you have it. Try it, you’ll like it. Every coach who has tried this way of practice has seen positive results. We have never received negative feedback from coaches regarding this type of baseball practice. The trick is doing it correctly.

I am always totally amazed when I walk by a baseball field and don’t see batting practice done this way.